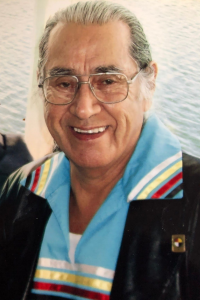 Albert Marshall, Elder, LLD is from the Moose Clan of the Mi’kmaw Nation. He was married to the late Murdena Marshall and together they lived in Eskasoni First Nation in Unama’ki-Cape Breton, Nova Scotia; they have six children, 14 grandchildren, and five great-grandchildren. Albert and Murdena have long been passionate advocates for the preservation, promotion, and revitalization of Mi’kmaw Traditional Knowledge, including language, spirituality, stories, practices, and ways of knowing. In 2009, Albert and Murdena were awarded Honorary Doctorates in recognition of their devotion and commitment to this work. Their energy, wisdom, and knowledge helped create the innovative Integrative Science academic program at Cape Breton University in the 1990s. Together, Albert and Murdena have developed KECCA (Knowledge Education & Culture Consultant Associates) to better enable their work and to encourage a strong future for the Mi’kmaw Nation and its peoples.

Albert is a passionate advocate of cross- cultural understandings and healing and of our human responsibilities to care for all creatures and our Earth Mother. He a fluent speaker of Mi’kmaw and the “designated voice” for the Mi’kmaw Elders of Unama’ki with respect to environmental issues. Albert sits on various committees and boards that guide initiatives in natural resource management, Aboriginal health research and education, or that serve First Nations’ governance issues or that otherwise work towards ethical environmental, social and economic practices. For example, he is a member of the Advisory Council for Unama’ki College of Cape Breton University, the Steering Committee for the Collaborative Environmental Planning Initiative (CEPI) for the Bras d’Or Lake, and the Advisory Board for the National Collaborating Centre for Aboriginal Health headquartered at the University of Northern British Columbia. Albert also served for several years on the board for the Bras d’Or Lake Biosphere Reserve Association, the group that successfully obtained UNESCO designation for the biosphere. He is the person who coined the phrase Two-Eyed Seeing / Etuaptmumk as a guiding principle for collaborative work which encourages learning to see from one eye with the strengths of Indigenous knowledges and ways of knowing, and from the other eye with the strengths of Western knowledges and ways of knowing … and learning to use both these eyes together, for the benefit of all. In 2009, Albert was awarded the Marshall Award for Aboriginal Leadership as part of the Eco-Hero Awards delivered by the NS Environmental Network (an umbrella organization of provincial environmental and health organizations). Albert was born in Eskasoni, NS. As a young boy, he was taken away from his family and spent many years as an inmate of the Shubenacadie Indian Residential School on the mainland of Nova Scotia. Albert was profoundly affected by this experience but today seldom talks about those many painful and traumatic years. Rather, the experience has led him on a lifelong quest to connect with and understand both the culture he was removed from, and the culture he was forced into … and to help these cultures find ways to live in mutual respect of each other’s strengths and ways. 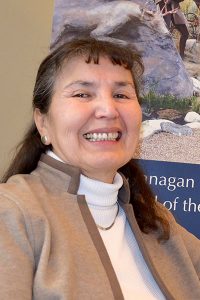 Jeannette Armstrong, Associate Professor in Indigenous Studies, is Syilx Okanagan.  As an award-winning writer and activist, novelist and poet she has always sought to change deeply biased misconceptions related to Indigenous people. Her research into Indigenous philosophies and Okanagan Syilx thought and environmental ethics that are coded into Syilx oral literatures has been recognized locally and globally.

To date, Western conventions have created a cultural blindness to Indigenous methods of knowledge documentation in oral story. The language and oral stories of the Syilx Okanagan contain a wealth of Indigenous knowledge. Unfortunately, much of this knowledge is inaccessible. As a fluent speaker of the nsyilxcn language, she pursues and promotes the analysis of Syilx culture and language contexts using a combination of Syilx story and Western literary conventions, as research methodology for her Syilx graduate students.

Jeannette’s current research includes addressing existing barriers to Indigenous research within this and other Interior Salish language communities through analysis and categorizations of published and unpublished collections aligned with Indigenous knowledge areas. Jeannette’s research will help in making Indigenous knowledge of the Syilx and other Salish Okanagan accessible for contemporary use and will provide planning and development support within Interior and Syilx Okanagan communities. 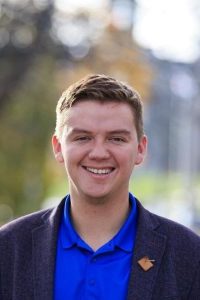 Aaron Prosper is a member of Eskasoni First Nation and now resides in Dartmouth, Nova Scotia. In 2017-2018, Aaron served as President of the Dalhousie Students’ Union, becoming the first Indigenous person to serve in this role.

Outside of his academic work, Aaron is a member of the Eastern Eagle Singers, a contemporary Mi’kmaw drum group based out of Sipe’knekatik First Nation.