“As a university, we are a critically important partner to society in its search for answers to big challenges.” 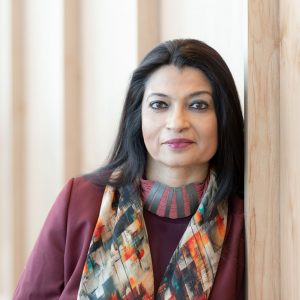 Professor Ananya Mukherjee Reed is Provost and Vice-President Academic at UBC Okanagan and Professor in the Department of Economics, Philosophy and Political Science at the Irving K. Barber Faculty of Arts and Social Sciences. In 2020, Professor Mukherjee Reed was appointed Co-executive lead for Anti-racism at UBC. She is also the Co-editor of the Canadian Journal of Development Studies.

Professor Mukherjee Reed obtained her doctoral degree in Political Economy & Public Policy from the University of Southern California, USA and her BA and MA degrees in Economics from Jadavpur University, India.

An interdisciplinary scholar in the field of Development Studies, Professor Mukherjee Reed’s work over the past decade has mostly concentrated on inclusive and people-centered development. Her current research project, in collaboration with the United Nations Research Institute for Social Development (UNRISD), Geneva, focuses on the UN’s Sustainable Development Goals and the role of universities in social change.

Prior to joining UBC in November 2018, Professor Mukherjee Reed was Dean of the Faculty of Liberal Arts and Professional Studies at York University. During her time at York University, she also served as Associate Vice-President of Research, Chair of the Department of Political Science and Founding Director of the International Secretariat for Human Development. In 2016, she was named as one of five brilliant women in academia by Canadian Immigrant magazine in their third annual tribute to ‘Immigrant Women of Inspiration’.

One-on-One is a Q&A series aimed at getting ‘behind the scenes’ with senior leadership at UBC. Read Professor Mukherjee Reed’s interview here.