Office of the Provost and Vice-President, Academic

I am delighted to announce that Professor Michael Burgess, Chair in Biomedical Ethics at UBC’s W. Maurice Young Centre for Applied Ethics is joining us as Associate Provost, Strategy from September 1, 2019.

In this role Professor Burgess will provide leadership for developing and implementing a comprehensive strategy for advancing academic innovation in accordance with UBC’s Strategic Plan Shaping the Next Century and Outlook 2040; help foster an institution-wide climate of academic innovation, in particular interdisciplinarity; oversee the development, evaluation, and review of relevant programs; and help develop  processes of shared governance to ensure the timely implementation of new academic initiatives.

Professor Burgess joined UBC in 1996 when he was hired as the Biomedical Ethics Research Chair with a joint appointment to Medical Genetics (the Centre is now within the School of Population and Public Health). In 2000 he was awarded the Killam Award for Excellence in Graduate Teaching. He was Principal of the College for Interdisciplinary Studies from 2008-2011.

In 2013, Professor Burgess relocated to the Okanagan campus to promote intercampus activities and to provide senior academic support and faculty mentoring. The Southern Medical Program has hosted him and during that time he has provided faculty development support in the Faculty of Management, the Faculty of Health and Social Development, and the School of Education. He was also involved in the restructuring of the interdisciplinary graduate studies program, is a member of two themes, and on the supervisory committee of several Okanagan graduate students.

Professor Burgess obtained his PhD from the University of Tennessee in Philosophy with a concentration in medical ethics. Professor Burgess’ research is collaborative and interdisciplinary. In 2006, with large scale funding from Genome Canada and Genome BC, he began collaboration to develop and implement an approach to deliberative public engagement, combining ethics, political science, qualitative methods, and economics on issues in science and health policy.

Professor Burgess’ currently funded research includes deliberation on the use of big data in health, cancer care funding decisions, animal welfare and food policy in Norway, and the release of gene-edited organisms into the environment. He is also working on projects involving the governance of remote and Indigenous biobanks, and on an SSHRC funded project on concepts of diversity and inclusiveness.

Posted in News, Office of the Provost and Vice-President, Academic, People

I am delighted to announce that Dr. Gino DiLabio has accepted the position of Dean pro tem of the Barber School, beginning July 1, 2019. DiLabio joined UBC Okanagan Campus in 2014 and is currently a professor and head of the department of chemistry.

Dr. DiLabio came to UBC from the National Institute of Nanotechnology (NINT), a joint institute of the National Research Council of Canada and the University of Alberta. At NINT/UofA, DiLabio worked as a senior scientist and as an associate director and held an adjunct professor appointment in the department of physics.

Dr. DiLabio is an active and accomplished researcher. To date, he has published 138 peer-reviewed scientific papers, three book chapters, one edited book and has given more than 150 invited and contributed presentations. Over the course of his career, he has been involved in the development of major research projects which have attracted significant amounts of funding from NSERC, CFI, BKDF, and the Department of National Defence. His technology development work has led to five patents, several of which are licensed.

I want to take this opportunity to thank Dr. Barbara Rutherford, the current Dean pro tem of the Barber School, who will complete her term on June 29, 2019. She has provided strong leadership to the School over the last year and, as acknowledged by her colleagues, has provided support for the faculty and staff at a time of transition.

I am delighted to announce that Dr. Jennifer (Jenn) Jakobi has accepted the position of Dean pro tem, College of Graduate Studies, beginning July 1, 2019. Dr. Jakobi is a professor in the Faculty of Health and Social Development's School of Health and Exercise Sciences.

Professor Jakobi, a member of UBC Okanagan since 2008 has been integral in the growth and development of the undergraduate and graduate programs in the School of Health and Exercise Sciences.

In her role as Associate Dean, Academic Programs, in the Faculty of Health and Social Development, she has initiated the development of cross-campus master-level programs. She is a research scientist in the field of exercise neuroscience who holds active grants from NSERC, CIHR and SSHRC. Most recently, as Associate Chair of Westcoast Women in Engineering Science and Technology (WWEST), she has contributed to generating a collaborative network of programs and individuals actively undertaking science, technology, engineering and math (STEM) community engagement.

Through the integrative STEM Team Advancing networks of Diversity (iSTAND) Program she is committed to increasing diversity across science, technology, engineering and math through providing mentorship, and opportunity to encourage, explore, understand and empower change through collaborative initiatives across the sciences, arts and humanities.

I would also like to take this opportunity to thank Professor Dwayne Tannant who completes his term on June 29, 2019. During his tenure UBC Okanagan saw a significant growth in graduate applications and acceptances, and I am extremely grateful to Professor Tannant for leading the CoGS team to work through this expansion.

This change in title is reflective of Dr. Sadiq’s role as Acting Dean in the absence of the Dean of Applied Science and his broader role and responsibility within the UBC Okanagan environment.

Dr. Sadiq is a Professor in the School of Engineering at UBC Okanagan and was appointed Associate Dean of the School of Engineering on September 1, 2015. During the past three and a half years, Dr. Sadiq has contributed significantly as a member of the Okanagan Leadership Team, attending the Deans’ Council and Strategic Enrolment Management Committee as well as other committees on the UBC Okanagan campus.

It gives us great pleasure to announce that Heather Berringer, Chief Librarian at the University of British Columbia (UBC) Okanagan Campus has been appointed Associate Provost, Learning Services for the campus. 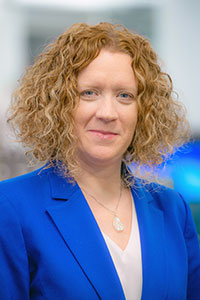 In this new role, Heather will provide leadership in the planning, development, and coordination of an integrated vision for learning services for UBC Okanagan. This will involve harnessing synergies between different campus entities such as the Library, the Centre for Teaching and Learning, makerspace UBCO, and other student learning supports.

Heather has been Chief Librarian at the University of British Columbia (UBC) Okanagan Campus since 2014. Throughout this time, Heather has led the development of new programs, spaces, and innovative partnerships that have significantly enhanced the learning experience at UBC Okanagan and established the Library as a thriving nexus of scholarly engagement for faculty and researchers.

Heather’s collaborative and inclusive approach to librarianship has led to unique initiatives that reach beyond campus to the broader community. The UBC Innovation Library, which is embedded in the Kelowna branch of the Okanagan Regional Library, provides access to millions of UBC’s electronic resources for the general public, as well as local and visiting entrepreneurs, and community researchers. Building on this successful partnership, Heather brought the Okanagan Regional Library to campus and opened the UBCO public branch of ORL in 2018. Through her leadership and support, the Library’s reach now extends across the southern interior of the province, through the work of the Digitized Okanagan History project, to local museums and archives.

During her tenure as Chief Librarian, Heather’s commitment to the student experience and outstanding leadership are perhaps best exemplified in the development of the new Commons building, a much-anticipated multi-million-dollar expansion to the Library which opened at the beginning of 2019. A state-of-the-art space for teaching and learning, the Commons is the flagship building on the UBC Okanagan campus and signals an exciting new era for all those who study, teach and visit the UBCO campus.

Please join us in congratulating Heather on her new role here at UBC Okanagan.

Posted in Learning Services, Library, News, Office of the Provost and Vice-President, Academic